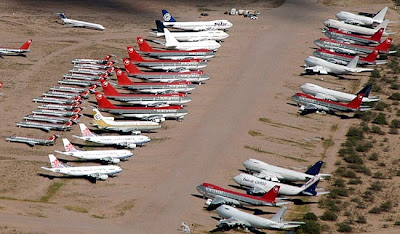 A few months ago NotForSale interviewed a whistleblower from inside the Evergreen Air Facility. For those who do not know Evergreen Air is a CIA front company for chemtrail operations within the United States, weapons and arms dealing, drug running and rendition tortures. The whistleblower known as KrisH provided the Intel Hub staff with documentation to prove his employment at the facility located in Pinal County Airpark in Arizona.
May 29, 2010

"From information that I have pieced together
over the past several years,I firmly believe that
EVERGREEN is one of the lead companies used to modify
aircraft used in CHEMTRAIL spraying operations,those
would be aircraft taken out of storage at the
Davis-Monthan Air Force Base boneyard in Tucson and
the Mojave Airport among others.There are 100’s of
aircraft available for CHEMTRAIL spraying ops because
of newer model replacements in the commercial and
military fleets. Google EVERGREEN AIR"

evergreen runs mccllellan airfield,mather air field(both closed air force bases)they have facilities on travis afb that military are allowed on only under escort and they run camp kholer all in sacramento.these pilots fly helicopters and cargo jets sometimes only a couple hundred feet from the ground.i have seen the blue angels and thunderbirds numerous times and they fly higher.evergreen are criminals who poison children(i have pics of them spraying over the local schools here.

Say No to Corporate America said...

Thank you for the information and for helping to expose this crime! I have seen other evidence that points to Evergreen and this "boneyard"; compared pictures from two years and nearly every plane was different and most were newer- some boneyard (Evergreen's money trail leads to Gov.).
Sharing information is important and this has become a major issue of my blog- priority is stopping this horrible crime. People are waking up everyday and this is being forced into the open.
This past Christmas/New Years spraying was incredibly heavy across the US and Europe. I have a fact based theory about the mass animal deaths and I hope you'll read it. I would like your opinion.

Wonder who picked January 22? That is the same day as the Roe vs Wade decision that legalized abortion back in 1973.

To Say No to Corporate America:
Thanks for the comment.

Regarding all the dead birds, your theory is very possible.

I tend to think it was from some sort of directed energy weaponry possibly using HAARP etc like discussed in Dr Judy Wood's 9/11 research (drjudywood.com).

In any case, it was not normal.

Say No To Corporate America! said...

Cathy, I have no idea why Jan 22- it is a global effort. I'm aware everyday, every time I walk outside.

HAARP is a distinct possibility- I think they may be used in conjunction with one another. They are both far from normal just like the animal deaths. The chemtrails are unhealthy and it is wrong but these animal deaths do have people looking up and taking a second look at chemtrails. Thank you for your work!

Thanks Say. I was thinking the same thing: that because of the mysterious animal deaths, folks are looking up and reading about possible reasons which often include chemtrails. So onward we go!

Febryary 2015- here in NE Texas even in late fall we see flies come in when a door is left open. I have not noticed flies, mosquitos, june bugs or crickets for over a year. Are they being killed off?? Is the purpose of the aerosol spraying to kill us off, or is there more than one reason?

X22 REPORT: Crimes Against Humanity, How Deep Is The Rabbit Hole, Patriots Turn